Kerry County Council is in the early stages of preparing a master plan for Tralee Town Centre West. The Tralee Town Centre West Area includes the old Denny Bacon Factory Site. The redevelopment of the former “Denny” site is central to the regeneration of the masterplan area and the future of Tralee Town Centre as an economically vibrant, attractive, self sufficient town centre with a unique character and high quality of life.

This requires a fresh, dynamic new beginning for the site. Central to this is the transformation of the site with a new image – while also acknowledging its historic and geographic identity.  Inspired by The Island of Geese street name, located beside the former factory, the site has been renamed as “Oileán na nGéanna, Trá lí” or “The island of Geese, Tralee”;

“Perhaps the most colourful of all Denny’s employees was Nell Devane from Boherbee.  Her distinctive hairstyle, her navy-blue overalls, her black wellington boots, her deepthroated shouts, her colourful language, her passion for Woodbines, and John Mitchels Club, leave an indelible mark on my boyish memory”.

“Oileán na nGéanna, Trá lí”- is one of Tralee’s most iconic industrial landmarks.  Situated between The Island of Geese and Rock Street, this former meat-processing plant was a major part of Kerry’s agricultural economy.  Pig-Dealers provided livestock, butchers sharpened their cleavers in anticipation, and breakfast plates were duly supplied with sausages, rashers, gammons, pork-steak, and – perhaps most memorably – the local delicacy of Denny factory “crubeen” (pig’s foot).  From the early hours of workday mornings, the bottom of Rock St. was alive to the lively, industrious, if somewhat grisly, sound of meat-processing.

“Oileán na nGéanna, Trá lí” is located west of Tralee’s two historical settlements, the Dominican friary and the 13th century Norman castle, and the area has long been a nucleus of trade, craft and industry.  In an Ordnance Survey map dating from 1878, “Oileán na nGéanna, Trá lí” is identified as a “Pork Shambles”, “shambles” being an archaic term for a butcher-shop, testifying to the fact that pork-manufacturing was present at the site long before the establishment of “Slattery’s Bacon Factory” in 1922.  19th century maps also reveal industries as diverse as clay-pipe making and salt-extracting clustered around the historical pork shambles.

Today, if you stop to take stock of the surviving structures, you will notice remnants from this period of bustle and rustic trade.  The chimney is believed to date from the late 19th century, and was used up until the factory’s closure to vent smoke from two large boilers. The chimney is also a living testament to 19th century meat-processing conventions, where large quantities of heat was necessary for burning animal hair, curing and the extracting of lard from fat. The warehouse situated at the back of the current structure – which also doubled as a holding-pin for pigs awaiting slaughter – is also of historical note,  in particular, the warehouse’s “Belfast Truss” roof, the latticed beams of which are of architectural interest. 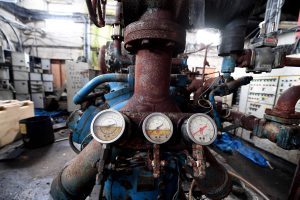 In 1943, Slattery’s Bacon Factory was purchased by the Denny Company, one of Ireland first multi-nationals.  In 1982, it was acquired by Kerry’s own agri-food success story, Kerry Group. Kerry Group’s acquisition of Denny came of no surprise, particularly because of the factory’s reliance on the then “Kerry Co-Op’s” pig-fattening centres. At the Denny Company’s height it had the biggest share of Ireland’s domestic market for pig produce, with two-thirds of the company’s workforce based in the Tralee factory.

The Tralee bacon factory endured through years of economic change and market-fluctuations, so, perhaps unsurprisingly, it was occasionally the scene of industrial unrest, with large-scale strikes occurring in the late forties and early eighties.  Nor was the factory unaffected by Ireland’s various political cataclysms.  Throughout 1915 and 1916, William P. Partridge, Dublin city councillor and captain of the Irish Citizen’s Army, was an active organiser in Kerry, establishing ITGWU branches, delivering speeches, and helping facilitate Roger Casement’s arms-shipment to Kerry in 1916.  In December of 1915, Partridge accused Ireland’s Lord Lieutenant, Ivor Guest, of forcing the dismissal of several Slattery’s Factory employees, alleging the dismissals were a ploy to boost a Dublin Castle army-recruiting drive, something Guest flatly denied.

In February 2014, Kerry Group director of Corporate Affairs, Frank Hayes, announced the company had decided to “gift” the site to the people of Tralee.  Undoubtedly, the days of wellington-clad factory girls, breakfasts of crubeen and other locally-produced offal, and escapee pigs hurtling through Rock Street shops (for these flashes of Denny factory life, and more, see the Kerryman article cited above), are gone.  However, rest assured, “Oileán na nGéanna, Trá lí” or “The island of Geese, Tralee” can once again be a hub of commercial activity, a source of community cohesion, and an injection of energy and bustle into the heart of Tralee town centre.